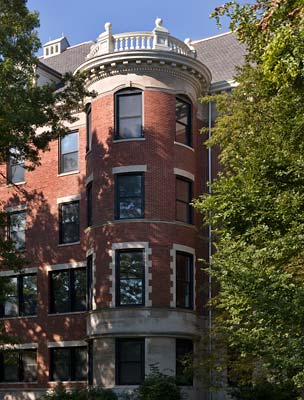 Based on investigation, recommendations for corrective repair, and construction documents, 30,500 SF of roofing included new asphalt shingle roof, copper inlay gutters, repointing of masonry and lightning protection were provided. The work which included replication of decorative metal balustrades at roof turrets was recognized with an Evanston Preservation Award in 2011.

The Civic Center, a four-story Georgian Revival style building constructed in 1901 and with a major addition in 1924, was originally constructed as the Marywood Academy, a girl’s boarding school. Closed in 1970, the building was adapted by the City of Evanston as its Civic Center and was listed on the National Register of Historic Places in 2005.